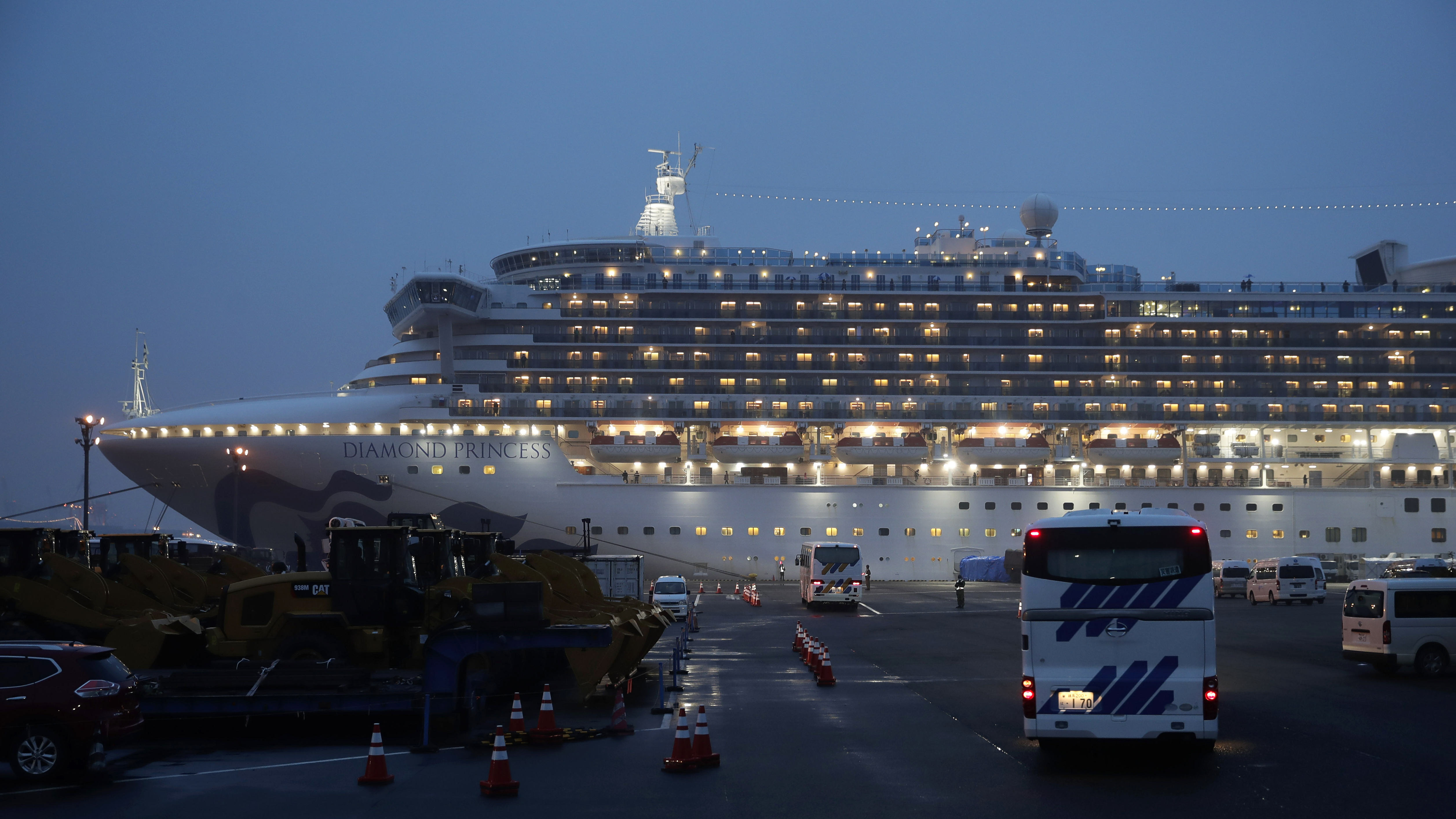 Another 70 cases of the coronavirus infection have been confirmed aboard the Diamond Princess cruise ship, currently quarantined in Japan, according to Japanese health officials.

This brings the total number of cases aboard the vessel to 355 as of Sunday, the largest confirmed cluster outside of mainland China. People with confirmed infections have been taken to hospitals in Japan.

After two weeks of quarantine at sea, officials from various countries including Canada, Italy, Hong Kong and South Korea are in the process of extracting their citizens from the vessel. The Diamond Princess is reported to have around 3,700 passengers and crew.About half of the passengers are from Japan, according to Reuters.

The U.S. State Department has organized a charter flight to evacuate Americans as early as Sunday evening. Only those who are not currently showing symptoms of infection with the virus will be allowed to return to the U.S. where they will face two weeks of quarantine at air force bases in California and Texas.

Approximately 400 American citizens are aboard the Diamond Princess. According to Anthony Fauci, director of the U.S. National Institute of Allergy and Infectious Diseases, 44 Americans on the cruise ship have been infected. Fauci said not all 44 people are sick.

Those who are not infected are not required to board the U.S. chartered flight, but the U.S. embassy in Tokyo has recommended that U.S. citizens get off the ship as soon as possible and take one of the chartered flights home.

"We're excited and relieved [to return to the U.S.]," John Montgomery, a passenger on the Diamond Princess, told NPR. "The fact that we're going back to the United States to have a quarantine, we feel there's a much better situation."

Montgomery is accompanied by his wife Carol, who is also a U.S. citizen. He told NPR that they both "feel fine," and are prepared to remain in quarantine after returning to the U.S.

"We understand why through an abundance of caution that an additional testing and evaluation and quarantine would guarantee that we're not bringing it back to the states," Montgomery told NPR.

The Diamond Princess, owned by Carnival Corp., went into quarantine on Feb. 3, after a man who disembarked in Hong Kong was diagnosed with the virus two weeks ago.

The ship is currently being held in the Japanese port of Yokohama near Tokyo. Originally, Japan said that the quarantine would be over on Feb. 19, but as more and more cases aboard the ship have been confirmed, local officials now say that only people who test negative for the COVID-19 virus will be released.

On Sunday, Japan reported six new cases of the coronavirus outside of the Diamond Princess cluster. This brings Japan's total number of in-land infections to 59, according to NHK, Japan's public broadcaster.

In Hong Kong, the resumption of academic classes has been pushed back another month, while municipal workers will work from home for at least another week. Classes were first suspended in January, when officials decided to extend the Lunar New Year holiday. Since then, the return date has been pushed back several times. According to Secretary for Education Kevin Yeung Yun-hung, classes are now scheduled to resume on March 16.

Meantime, another cruise ship, the MS Westerdam, reported its first coronavirus case on Sunday - an 83-year-old American woman who had been a passenger. Malaysian Deputy Prime Minister Wan Azizah Wan Ismail told reporters on Sunday, that the passenger tested positive for the coronavirus twice after landing in Kuala Lumpur, the country's capital.

The ship was thought to be free of the virus when it docked in the Cambodian port of Sihanoukville on Friday, after being turned away from five other ports in Japan, Taiwan, Guam, the Philippines and Thailand. Passengers were screened by Cambodian health officials before they were allowed to disembark. Now, authorities fear that other released passengers might also be infected, further spreading the virus.

Malaysian officials said the country will not allow any more passengers from the MS Westerdam to enter the country and has barred cruise ships that come from or make contact with any Chinese ports from docking.

According to the Malaysian health ministry, 145 passengers aboard the MS Westerdam flew to Malaysia after the ship docked in Cambodia. The 83-year-old American woman and her husband, who is also an American citizen, were the only passengers to arrive in Malaysia to exhibit symptoms.

The woman is currently in stable condition and is being treated in a hospital isolation ward, according to Malaysian health officials. Her husband, who is 85-years-old, has tested negative for the virus, but is still being monitored for changes in condition.

Figures from China, released on Sunday, showed 68,500 cases of COVID-19 and 1,665 deaths, mostly in Hubei province, according to China's National Health Commission.

Last week, the U.S. Embassy in China confirmed the first American coronavirus casualty, a 60-year-old who died at a hospital in Wuhan, China. There are currently 15 cases of people with the COVID-19 virus in the United States according to the Centers for Disease Control and Prevention.

A World Health Organization delegation is currently in China to help investigate the country's coronavirus epidemic, according to a tweet posted by WHO Director-General Dr. Tedros Adhanom Ghebreyesus on Sunday.

According to another tweet by Ghebreyesus, an advance team for the delegation left for China on Feb. 9. The team is led by Bruce Aylward, a Canadian epidemiologist and emergencies expert.

SAN ANTONIO - The US Department of Health and Human Services, the Centers for Disease Control and Prevention and the Department of Defense is scheduled to receive two Department of State chartered evacuation flights from

The economic toll of the coronavirus could cost the film industry billions. The planned April premiere in China for Daniel Craig's final stint as James Bond in " No Time to Die "

An American lawyer and his wife are refusing to evacuate the coronavirus-stricken cruise ship docked off the coast of Japan - because they say they feel safer aboard. Matthew Smith, who has been quarantined on the

If it were not for the event of the coronavirus epidemic adversely impacting on confidence in our financial markets, the Kiwi dollar would be riding a lot higher against the US dollar at this time. The

Thiruvananthapuram ( Kerala) [India], Feb 17 (ANI): Out of the total 418 END_OF_DOCUMENT_TOKEN_TO_BE_REPLACED

According to the National Health Commission (NHC) in China, 142 more people END_OF_DOCUMENT_TOKEN_TO_BE_REPLACED